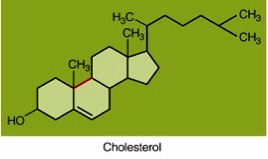 As we talk about heart health, one of the key words we throw around is “cholesterol”. It’s an important number to know, to understand your risk for heart disease and overall health. You’ve probably heard about the good and bad cholesterol. But could you read and interpret the numbers on your own lipid panel? Does that term even mean anything to you? Let’s dive in.

Chemically speaking, cholesterol is an the lipid family. The term lipid is often used interchangeably with the term fat, but there is a distinction. Lipids are actually the overall category, under which we have three categories: triglycerides, phospholipids, and sterols. Now it sounds like a lot of science, but before your eyes roll into the back of your head, give me a minute.

Phospholipids are fatty acids combined with a phosphorus molecule. You might recognize phosphorus as an essential mineral. That’s because phospholipids are known for their role in cell membranes. In other words, keeping all of your body’s cells in tact. These are super important to your body, but not significant in terms of your heart health.

Finally, we come to sterols. These are known for their ring structure. The most common one is cholesterol. Cholesterol is found only in animals, not in plants. When you’re thinking about your diet, animal products with more fat tend to have more cholesterol (i.e. skim milk has less cholesterol than whole milk).

What role does cholesterol play in the body?

Cholesterol is essential for your health. It is a component of our cell membranes – and plays a significant role in the brain, nervous system, liver and blood. The body uses cholesterol to make other things that it needs, like vitamin D and sex hormones.

Some cholesterol combine with proteins to form lipoproteins (lipo = fat/cholesterol), which is the way that cholesterol circulates through the body. Your liver is able to make cholesterol on its own – those individuals following a strictly vegan diet are not at-risk for a cholesterol deficiency!

Are there different kinds of cholesterol?

Once it’s made, the liver sends it out into your blood for circulation to the rest of the body in the form of low-density lipoproteins, or LDL. You may have heard LDL called the “bad” cholesterol. That is because the ratio of fat to protein is really high. The LDL is a major source of fatty aids in your bloodstream. Your body uses these fatty acids in many ways – e.g. energy – but the problem comes when there is more available than your body needs. A build-up of LDL cholesterol particles is called plaque, and causes inflammation. Both the plaque itself and the resulting inflammation restrict blood flow, crowd the blood vessels, and can lead to a complete blockage (think: heart attack, stroke).

The other major player in the world of cholesterol is high-density lipoproteins, or HDL. This is often referred to as the “good” cholesterol. It can be confusing, because it ‘s made up of mostly the same thing as LDL cholesterol – but it’s in a different ratio, which gives it different properties and function. Your HDL is also made in the liver, but this one functions like a vacuum. It circulates in the body, collecting excess cholesterol or cholesterol fragments, and taking it back to the liver. There it is either removed or recycled. HDL has anti-inflammatory properties, and protects your body from plaque formation.

You said something about a lipid panel?

In addition to the above, your lipid panel may include things like very-low-density lipoprotein (VLDL) cholesterol levels, the ratio of total cholesterol to HDL or the ratio of LDL to HDL. These tests are a more detailed look at heart health risks, and you can discuss with your physician. But they aren’t always done, and don’t necessarily give you better information than the basic lipid panel.

As a reminder from my post on loving your heart last week, that as you look at your own lipid panel, you’re looking for the following numbers:

More to come later this week, on what you can do to make an impact on those numbers, when it comes to diet and exercise.