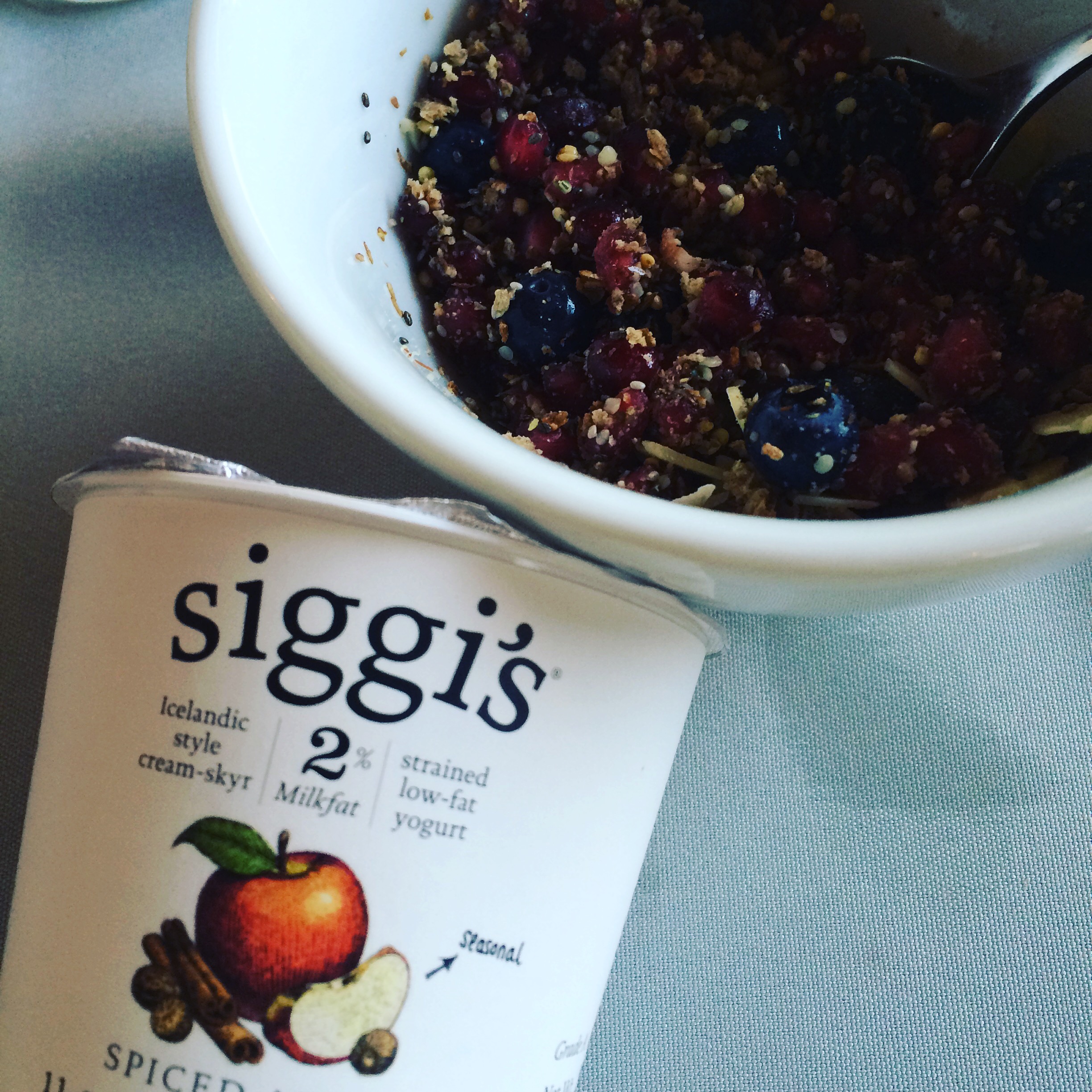 My obsession with Siggi’s yogurt is definitely not a secret. If you follow me on Instagram, you’ve seen plenty of evidence of how I like to eat my Siggi’s. Spoiler: it often involves some fruit and Kashi cereal. There are plenty of other ways to enjoy the wonderful yogurt, but sometimes I just like tried and true (and quick and easy!).

Last week, I was invited to attend a special breakfast event for dietitians – and a couple of food bloggers – that Siggi’s hosted. It involved hearing more about the company from the founder, Siggi Hilmarsson. The event was great, and reminded me of why I love the yogurt and can so easily evangelize for them 🙂

First, a quick primer on what Siggi’s yogurt actual is. Siggi’s yogurt is known as skyr, which sounds unusual, but it’s simply another version of a strained yogurt. Greek yogurt is the most popular kind of strained yogurt in the US, but there are other varieties from other parts of the world. It goes through the same general process, where more of the liquid is strained out than in regular yogurt. This leaves a thicker yogurt that has much of the lactose removed, and is higher in protein.

We got a nice demonstration from Siggi himself on the yogurt making process. He joked that the problem with a yogurt demonstration is that the process is very easy but very long. There’s not too much to see, and you have to wait around for awhile to get anything worth eating!

Instead of waiting around for the demonstration, there was a beautiful yogurt bar set up with lots of flavors of Siggi’s yogurt, including my choice of the morning: Spiced Apple. It’s a seasonal flavor, so if you see it in the stores, grab it!

In addition to the yogurt choices, there were lots of fruit options including mango, berries and pomegranate seeds. I love pomegranate, but often get bogged down by the work to remove the seeds. If they’re just sitting in a bowl, looking oh so pretty, I cannot resist.

Further down the line came the dry ingredients. Crushed granola, hemp seeds, chia seeds and sliced almonds to name a few. I don’t know about you, but when I see such a bounty, I want it all. However, exhibiting a little bit of restraint can make for flavors that pair nicely.

I love that Siggi’s has a range of options when it comes to the fat content. The default is the fat free 0%. It’s not that the yogurt came about when the fat-free fad was going on – it actually goes back to the roots of the skyr process. The fat was separated and used to make butter, leaving the skim milk behind to make yogurt.

In addition, there are a few 2% flavors – coconut, pumpkin spice, and this seasonal spiced vanilla. They have also released a line of 4% flavors. My favorite is strawberry rhubarb. Yum! The 4% flavors are a little smaller than the 0% and 2% flavors, but other than the plain, the calories are all between 100 and 130 per container.

But by far, my favorite thing about Siggi’s yogurt is the sugar content. Most flavored yogurts have tons of added sugar in them. Siggi’s is the only brand that can boast more protein than sugar in their flavors. In a comparison to other major brands of strained yogurt, Siggi’s has anywhere from 20-33% less sugar. Siggi’s has about 2g of sugar per ounce, whereas other brands have 3g or more per ounce. While 1g doesn’t seem like a big difference, most yogurts are 5-6 ounces, and most people who eat yogurt do so multiple times a week.

Siggi said that they make yogurt for people who like yogurt. Sure, we can now make yogurt that tastes like Boston Cream Pie or Red Velvet Cake, but it’s less about the yogurt at that point. Instead, they focus on the yogurt, and add a little flavor to go with it.

I loved hearing from Siggi about the early stages of the company, how it started as nostalgia on a whim, and has grown into a very successful company. Like all great small business/entrepreneur stories, Siggi spoke about the hustle required to get where they are. He showed us photos of him selling yogurt at farmer’s markets in New York City, complete with hand-made signs stapled to an old wine box.

The morning was complete with networking and catching up with some other dietitian friends. And I was able to take home some leftover yogurt and a really cute Siggi’s tote.

Don’t let the confused look on Siggi’s face fool you – he knows exactly what he’s doing in creating a great product. And did I mention that they have a dietitian on staff? Score another one for the brand.

What is your favorite way to enjoy yogurt? Have you tried Siggi’s before?