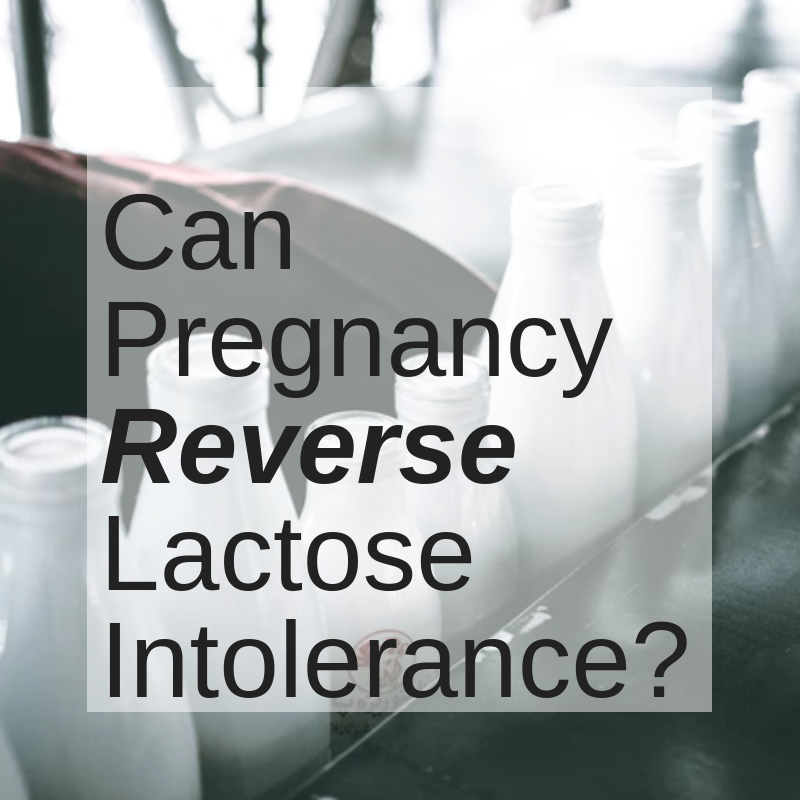 After my post on eating for two, I was asked whether it is possible for pregnancy to cause a reversal of lactose intolerance (LI). I was intrigued by the question, and decided to do some research on the subject.

First, what is LI? Is it different than a milk allergy?

LI is the inability of the body to breakdown lactose, the naturally occurring sugar found in milk and many dairy products. People with LI don’t have enough lactase, which is the enzyme that breaks down the lactose. Some people have a secondary LI, meaning it is caused by another disease or by a drug.

When lactose isn’t broken down properly, it causes a host of unpleasant symptoms. Abdominal bloating, gas, diarrhea, nausea or vomiting are all common, and can show up anywhere from 30 minutes to 2 hours after consuming dairy. Like many other conditions, LI presents across a spectrum – for some people it’s annoying or embarrassing, while for others it is debilitating.

But it’s not all doom and gloom. There are Lactaid(R) products – real milk or ice cream with the lactose removed – and Lactaid(R) pills – a chewable form of lactase. Also, not all dairy causes LI symptoms. Many hard or aged cheeses are tolerated well. In addition, goat’s milk and goat’s milk products are often tolerated better than cow’s milk.

A milk allergy, on the other hand, is a response to the casein or whey, the proteins in milk. When the body sees them, an actual immune system response follows. The symptoms may look similar to lactose intolerance, and can also include anaphylactic shock. Again, the severity of these symptoms falls somewhere along a spectrum from not too bad to coma.

What happens during pregnancy?

Many women find themselves suddenly lactose intolerant when they get pregnant, which is a major bummer and can be difficult to adjust to, with all of the other changes that occur during pregnancy. For some, it only lasts during their pregnancy. For others, it stays with them – or with their baby – forever.

Food tolerances and food sensitivity changes make sense. For one, as pregnancy goes on, the digestive system gets pushed around and squished. Trust me when I say that the digestive tract does not work like it did pre-pregnancy. I’m still not sure my organs have returned to their right location! Hormones play a role, as well. And let’s not forget the change in our immune system – a good thing since mom’s body is growing a human that is 50% “other”. If mom’s immune system was working exactly as it did prior to pregnancy, her body would attack the fetus as an invader.

But there are a lucky few out there… According to a Medscape article on the subject, 44% of women who suffer from lactose intolerance find themselves able to tolerate dairy when pregnant! The references on Medscape didn’t lead to a specific study where I could corroborate the statement. However, I did find A LOT of anecdotal evidence on mom blogs and forums saying this had been their experience.

From what I was able to find – again, more anecdotal that backed by a research study – doctors believe this newfound tolerance might occur because the intestines slow down during pregnancy. If food has a longer transit time, it is more likely to be fully digested and properly absorbed. Additionally, there could be bacterial adaptation to lactose when pregnant, meaning that the bacteria in your gut adapt to being able to break down lactose.

In summary, anecdotal evidence indicates that some women can suddenly be lactose tolerant during pregnancy. If it happens to you, consider yourself lucky, but don’t assume it will last forever. If you are less lucky, and find yourself with a new-found sensitivity or intolerance, I’d love to talk with you about navigating this transitional time. You can contact me with questions or set-up an appointment.