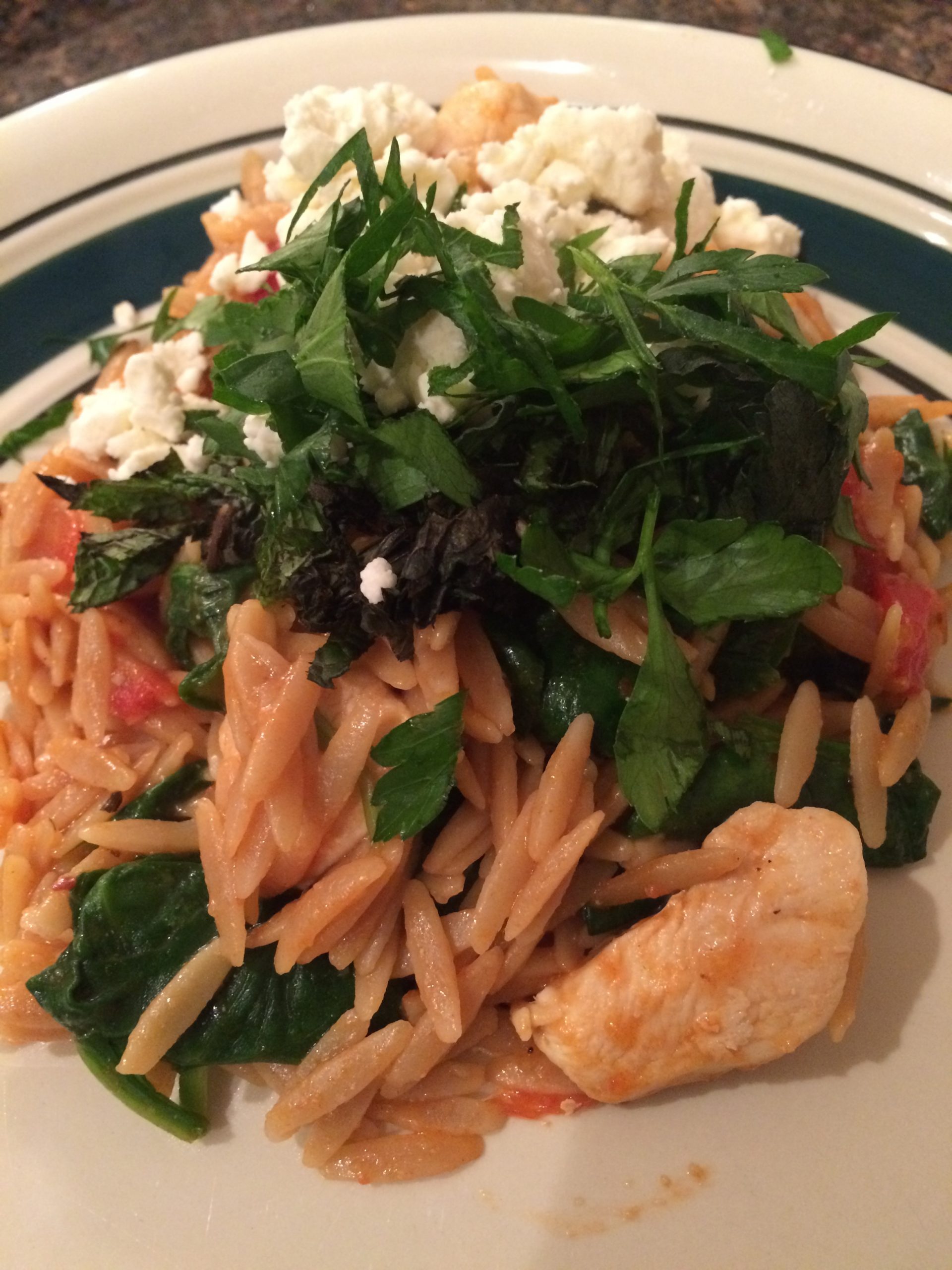 I wanted to share the recipe that we first made in the Cooking with Paul series. It really is quite quick and easy. I pulled the recipe from Cooking Light and sent it to the boys to handle buying some of the ingredients. I had some of the pantry basics already, which I contributed. I figured that if they didn’t cook often, a selection of herbs and spices probably didn’t fill their pantry!

When I arrived, the guys confessed they had some issues with a few ingredients. First of all, they had no idea where to find feta cheese in the grocery store. I know that both of them enjoy feta cheese, and so it wasn’t that they didn’t know what it was. The problem truly was in navigating the grocery store.

For those of you that don’t grocery shop often, I have two suggestions. First, shop at the same store every time. At least at first. You’ll learn the layout of the store, which will make the whole process easier. And things that are easier you tend to do – which means more meals cooked at home. That said, not everything is always intuitive. Sometimes the feta cheese is in the dairy section, with blocks of cheese. Sometimes it’s closer to the deli or prepared foods section, near specialty cheeses and hummus. My second suggestion is to ask an employee if you are having a hard time finding something. Third, consider getting your groceries delivered. Through online ordering, you can just type “feta” into the search bar and VOILA!

But it gave me the chance to sing the benefits of canned, diced tomatoes. I always have these on hand at home. I like to keep a variety of no salt added and fire roasted (fire roasted with no salt added is my ideal, but they are harder to find). These are one of my favorite recipe starters. Or recipe fixers, as the case may be. They have a good shelf life, and they can be thrown in a variety of recipes. Plus, canned tomatoes actually have more lycopene (an antioxidant) than fresh tomatoes!

And the third sticky point when it came to ingredients? Orzo! Neither of them had ever heard of orzo. If you’re in that boat, orzo is simply a rice-shaped pasta. When you’re looking for whole grains, a whole wheat orzo will cook up in about 1/3 of the time that brown rice will.

After we had these questions answered, we got all the ingredients out and had them easily accessible on the counter. This recipe doesn’t require a lot of chopping or prepping of ingredients, so I felt good about being able to see all of the ingredients, even if they weren’t pre-measured.

We started off putting a pot of water on to boil. While it was heating up, we chopped up the chicken. The most important thing when chopping ingredients for a recipe is to make the pieces uniform in size (or very close to it). This ensures that each piece takes about the same amount of time to cook. And the smaller the pieces, the less time it takes to cook. When it comes to meat, I like a nice bite-sized piece, maybe the size of 2 dice.

For this recipe, we decided to increase the amount of chicken – instead of one pound we chopped 3 large breasts (closer to 2 pounds). Normally, I cook about 4 ounces of meat per person (1/4 pound), depending on the recipe, since I try to skew more of my meals toward plant-based.

Once the chicken was chopped up, we heated a skillet to medium high with about 1 tablespoon of oil. The guys had canola, so that’s what we used. If you’re going to use canola oil, I highly recommend choosing organic. My personal preference is olive oil, especially for an Italian option. We sauteed the chicken until it was just cooked through.

Does anyone else have a serious fear of both under- and over-cooking chicken? The timing can be really tricky if you’re new to cooking. First sign, there won’t be any pink on the outside (this is probably pretty obvious). You’ll also notice that the pieces of chicken will become firmer. The benefit of chopping up your meat into small pieces that are all the same size? You won’t miss one when you sacrifice it to check for doneness!

Once the meat was cooked, we put it on a plate and set it aside. In the now empty skillet, we put the tomato paste and diced tomatoes, including the liquid. If you are using fresh tomatoes, you might want to take about 1/4 cup of the pasta liquid to thin out the sauce a little. But at this point, we’re really just heating up the ingredients. Add a pinch of salt and black and red pepper to taste. All of us agreed that spicy is better, so I added a lot more of the red pepper flakes.

About now, the pasta was done cooking. We drained it, and set it aside.

Back in the skillet, we added the baby spinach, and cooked until it had wilted. Basically, as I told the guys, you want the spinach to start to look sad. It doesn’t take too long for that to happen. It might require some stirring so that the spinach gets even opportunity on the hot part of the pan.

Once the spinach had wilted (2-3 minutes, tops), we added the chicken and orzo into the skillet, tossing everything to combine.

We served it topped with crumbled feta, and fresh parsley – because I had it. It was a tasty dinner, but the best part for me was that both Tim and Paul said that they thought they could make it again on their own.