Why Coconut Oil is (Still) Bad for Your Heart: A Scientific Review 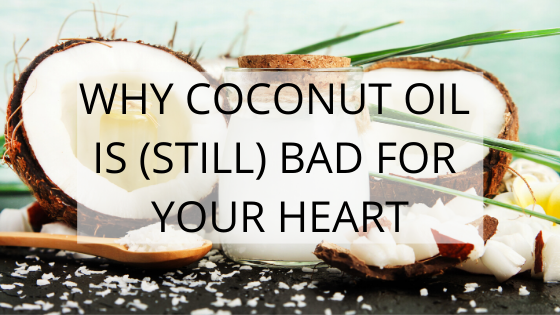 “Based on the research we have, coconut oil is NOT a healthful choice. Hard stop.”

Let me start by saying that I believe in food freedom. I believe that all foods can fit into a healthy dietary pattern. I’m not here to tell you “always” or “never”.

I have seen how some celebrities, brands and media take advantage of people who are in vulnerable life stages or health conditions. Whether it is instilling a deep fear of certain foods or nutrients, or promising miracle results from others.

But I believe in presenting people with the information they need to make the best decision for themselves and their families. And here’s the truth:

Based on the research we have, coconut oil is not a healthful choice. Hard stop.

I realize this isn’t a popular opinion right now. There are so many claims of the health benefits of coconut oil – from lower rates of inflammation to weight loss to better blood sugar control to preventing Alzheimer’s disease. Given the intensity of the claims, you would expect a large body of evidence to support these claims. At this point, there just isn’t.

The reality is the scientific support for these claims is lacking. A meta-analysis was published in January 2020 that re-ignited the conversation and prompted me to review the evidence. Here’s a look at the claims, and the reality of the research behind it.

The claims about weight loss and coconut oil stem from the fact that coconut oil contains medium chain triglycerides (MCTs) and include they promote weight loss by speeding up metabolism and reduce belly bloat. These claims are based on studies done with a small number of participants, making them hard to apply to the general population. Also, the effects were minimal – both the amount of pounds shed and inches lost by study participants were very slight. In some of the studies, participants made other changes that could have promoted those changes. For example, they ate less calories and exercised more, which means there wasn’t a good control group.

But here’s the main rub: coconut oil is the largest food source of MCTs, but it is not synonymous with MCT oil used in research studies. The MCT oil used in research is composed almost entirely of C8 and C10 fatty acids. (Sidenote: This means they have 8 or 10 carbons, respectively. The number of carbon atoms is what designates how ‘medium’ or ‘long’ the chain is.) Coconut oil is only about 15% C8 or C10, with the rest being C12. Unfortunately, C12 fatty acids haven’t shown the same effect as C8 or C10. Meaning the amount of C8 and C10 is the key factor, and a person would have to eat a massive amount of coconut oil to get the amount of C8 and C10 shown to help with weight loss.

Key takeaway? A massive amount of anything isn’t conducive to weight loss. And there’s not solid evidence at this time to recommend coconut oil to help lose weight.

However, linoleic acid had the same effect on insulin secretion as lauric acid did. Linoleic acid is a C18 unsaturated fatty acid that is known to be healthy in many ways from other studies. Which indicates the benefits may not be caused by the lauric acid.

But then a 2011 study in mice concluded that both LCTs and MCTs increased insulin resistance, just due to different mechanisms. Again, showing us that we cannot connect positive health outcomes to coconut oil or its individual fatty acids.

Let’s also remember that findings in animal studies may not be applicable to humans. And there are exactly zero human studies on the effect of coconut oil on insulin sensitivity or diabetes.

Key takeaway? There’s no evidence that coconut oil increases insulin sensitivity or can be helpful in the prevention or treatment of diabetes in humans. And though animal studies can help point to places where we need to do more research, the results of animal studies cannot be applied directly to humans.

Glucose is the main source of energy for the brain (sidenote: this is a key factor in carbohydrate recommendations!). In Alzheimer’s disease, brain cells can lose their ability to use glucose for fuel, and researchers believe ketones could be the alternative fuel source. Your liver makes ketones when it breaks down fat, especially MCTs. Meaning more MCTs leads to more ketones leads to better brain health for Alzhaeimer’s patients.

However, most of the research in this area is theoretical and preliminary – very little has been done in humans, and no studies have used actual coconut oil. Without clinical testing, we can’t take anecdotal evidence and turn them into recommendations for the general public.

Let’s pause here for a second, because I think this is a big sticky point for nutrition science, and there are some interesting nuances for people to consider. There is a difference between disease markers (e.g., LDL cholesterol) and actually having a disease (e.g., cardiovascular disease and stroke). It is not necessarily true that the presence of disease markers means more disease.

Again, from the full body of research, we know that higher LDL levels increase risk for heart disease and stroke and that eating more saturated fat will almost certainly lead to higher LDL levels. However, there is growing evidence that eating saturated fat may not increase your likelihood of heart disease and stroke. In other words, the disease markers may not actually lead to more disease. Even if your LDL rises because you ate more saturated fat, that may not lead to more heart disease and stroke. This is the crux of the debate. There is so much more research to do here! But at this point, we don’t have enough evidence to overturn previous recommendations. Ok, back to the bigger conversation.

Research has shown an association among coconut products (e.g., coconut cream, coconut oil and whole coconut) with higher levels of HDL cholesterol. Higher HDL cholesterol is associated with heart health, not heart disease. A legitimate positive for coconut foods. However, you have to take the good with the bad, since LDL levels also rise. Specifically, a recent meta-analysis found that coconut oil consumption leads to higher levels of LDL cholesterol compared with other vegetable oils.

As a registered dietitian, it is my job to make evidence-based recommendations to my clients. To do this with confidence, I need a large body of consistent, robust data. In the “good oil vs bad oil” discussion, we’re just not there yet. All we know for sure is coconut oil contains a very high concentration of saturated fat (which has been proven to increase LDL cholesterol, a risk factor for heart disease), a low concentration of MCTs (which may increase calories burned during digestion), and the same number of calories per tablespoon as other plant-based oils (120 calories/tablespoon) like olive oil.

So does coconut oil have a place in your diet? Perhaps!

I encourage my clients to avoid coconut oil as their main cooking oil – save that for unsaturated fats like olive oil, canola oil or avocado oil. This is because when you go above the smoke point of a fat, free radicals form, which damages cell walls leading to inflammation and increasing risk for cardiovascular disease and cancer. The smoke point of coconut oil is 50 degrees lower than extra-virgin olive oil.

However, sometimes only the coconut oil flavor will work – like in a Thai curry dish. Choose coconut oils more for taste, and less for health. So if you want to try it – go ahead. Enjoy the flavor. But remember… the saturated fat guidelines have not changed.

Want to dive into the research yourself? Below are some of the resources that I have used.